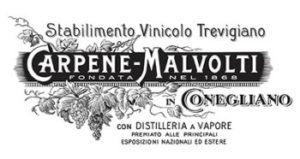 Carpenè Malvolti – historical firm of Italia Oenology – was founded in 1868 from the desire of Antonio Carpenè to make sparkling wines and to distill wines with the grapes harvested from the hills of the Conegliano and Valdobbiadene area. A dream that has become a mission, now in its Fifth Generation. The winery is located in Conegliano, refined City of Art in the Province of Treviso, in the heart of the Prosecco Superiore D.O.C.G. area and site of the first Oenological School in Italy founded in 1876 by Antonio Carpenè himself. As a way to commend Antonio Carpenè for the efforts he made in favour of the Italian Oenology and for turning Conegliano into the Prosecco homeland – which obtained the “D.O.C.G” (Controlled and Guaranteed Denomination of Orgin) status in 2009 – the city showed its gratitude by naming a street after him and realizing a bust in his honour. The bust is placed in front of the Oenological School, which is still nowadays recognized as one of the most prestigious Educational Institutes in Italy. Since 1868, Carpenè Malvolti has identified itself with its history – made of Territory, research and innovation – taking part in the cultural, economic and social growth of the Conegliano Valdobbiadene vine-growing area. The first Winery in Italy to produce Prosecco as a Sparkling Wine, to improve the sparkling wine process (Charmat Method) and to report, already in 1924, the denomination “Prosecco Amabile dei Colli di Conegliano” on label, linking the name of the wine to the grape variety and its Territory of origin.

View And Shop Our Wines